The Danish food company Uhrenholt has recently strengthened both security and performance in their data center with VMware’s virtualization technology. Uhrenholt’s new hyper-converged infrastructure that merges storage, servers, network, and virtualization into one platform gives the IT department complete control over users worldwide and creates a foundation for future utilization of cloud resources.

Uhrenholt is a global company with about 260 employees worldwide. They run their data center based on a couple of basic requirements. First, employees must have easy and fast access to communication tools and business applications, whether working at the headquarters in Middelfart, Malaysia or elsewhere in the world. Secondly, security is a prerequisite for running an effective business. For this reason, information security and data protection are at the top of the management’s priority list, and there is a broad recognition in the company that proactivity and timely care is the best defense against attacks and other security incidents.

“After we got the solution from VMware, we can see that the performance is four times as good as before. We no longer have our hypervisor’s monthly patch management process because everything is automated. And we have a continuously developed platform,” says Marcel From Dührkoop.

It is against this background you should view Uhrenholt’s recent change of virtualization components in their data center. They have used Cisco HyperFlex and Microsoft Hyper-V for several years as hypervisors. That combination has served them well, but over time there was a desire to optimize the setup. Application performance in the data center was not as desired. Purely in terms of security, there were some points of concern that exposed the business to unnecessary risk. And they had challenges creating new virtual machines via Remote Desktop Services.

“In addition, we had to plan patching of our Windows servers approximately once a month, and then we had to set aside a whole day over a weekend for the update itself. You get tired of that in the long run,” explains Marcel From Dührkoop, Director of Security & Infrastructure at Uhrenholt.

Uhrenholt discussed all their wishes for optimizing infrastructure, security, and process management with their in-house consultants from Conscia. The parties settled on a solution consisting of VMware vSphere as a new hypervisor in combination with VMware vSAN developed on top of the Cisco UCS platform. It is a future-proof solution that offers flexible, hyper-converged infrastructure configurations designed explicitly for a modern hybrid cloud data center focusing on high performance.

“After we got the solution from VMware, we can see that the performance is four times as good as before. We no longer have our hypervisor’s monthly patch management process because everything is automated. And we have a continuously developed platform,” says Marcel From Dührkoop.

Part of Uhrenholt’s business case to the management was to present a VDI solution that made creating new virtual machines easy, fast, and secure. Something that, for various technical reasons, was no longer possible in their previous setup. They found this VDI solution in VMware Horizon. So now Uhrenholt can not only create the virtual machines they need; users are also greeted by a virtual desktop with the exact same user interface as if they logged on from a regular computer. Previously, they worked with a server version of the Windows user interface.

In addition to an improved user experience, VMware Horizon also helps to strengthen security in Uhrenholt. Previously, multiple users shared resources on one server. This setup made it slower to access and use applications and made the company more vulnerable to breakdowns and attacks that could spread from machine to machine. With VMware Horizon, a user does not share resources with others but gets their virtual desktop on a dedicated server, providing a more robust security structure.

“Throughout the process, we have been very satisfied with Conscia’s role as Trusted Advisors. They have some super-talented consultants who are experts in infrastructure and networks. And we like that Conscia acts as our one point of contact. They are our gateway to the technology suppliers, so we don’t have to spend resources on that part. They fulfill that task well.”
Marcel From Dührkoop, Director of Security & Infrastructure at Uhrenholt

As Gartner and other security experts have pointed out, micro-segmentation is one of the most effective ways to strengthen IT security in an organization. Therefore, Uhrenholt also implemented VMware NSX Distributed Firewall (DFW) to micro-segment servers and networks as an additional security measure. VMware NSX DFW establishes watertight partitions in the infrastructure, so isolating a server is easy and fast if it becomes compromised, and it creates divisions between departments. VMware NSX DFW also includes Intelligence, which provides the organization with insight into the traffic to and from applications, what type of traffic it is, and the ability to create firewall rules to control network traffic.

Uhrenholt also chose to implement VMware NSX Advanced Load Balancer to complete the solution and make it fully redundant. This solution distributes traffic to the proper components in the network architecture so that the load is evenly distributed. In addition, it inspects network traffic quality to detect incoming malicious traffic and optimize the connection to clients.

In total, Marcel From Dührkoop sees the switch to VMware as a significant upgrade of security and performance in their data center.

“If you run your own data center, like we did, and don’t want to compromise, you have to future-proof the environment. In this area, we were a bit vulnerable in our old setup. However, with VMware’s solutions, we have gained a strong technology engine, and we can grow and grow for many years to come,” says Marcel From Dührkoop and concludes:

“Throughout the process, we have been very satisfied with Conscia’s role as Trusted Advisors. They have some super-talented consultants who are experts in infrastructure and networks. And we like that Conscia acts as our one point of contact. They are our gateway to the technology suppliers, so we don’t have to spend resources on that part. They fulfill that task well.”

Uhrenholt is engaged in the purchase and sale of food globally and has around 260 employees distributed all over the world. The company has offices and representatives in more than 20 countries, and the products are sold in over 120 countries under the various brands Emborg, Friendship, and Amigo. 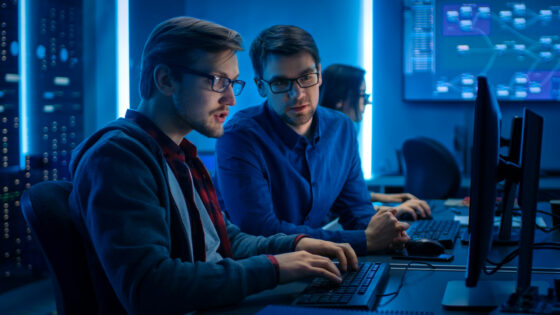 From the point of view of Conscia's Security Operations Center (SOC), the year 2022 confirmed the fact that managing cyber risks in business has become...
Read more
Find more in our Knowledge Library